Music therapy: the benefits of music on the body and mind

What are the differences between a Hang, a Handpan and a Tongue Drum?

What if the sound of the tongue drum helped you heal? 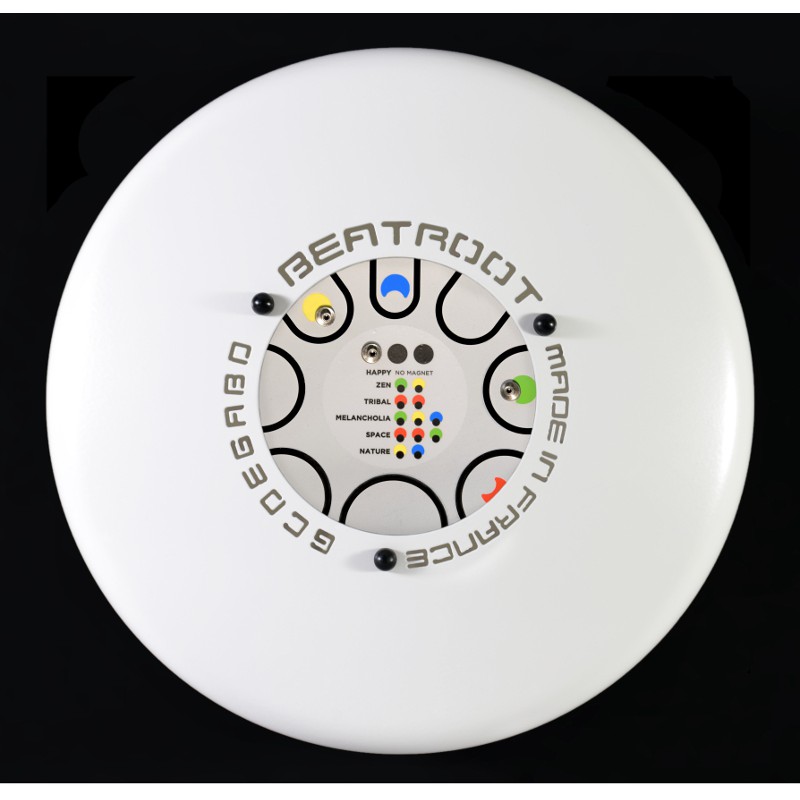 The most successful instrument in the idiophone family is the Multiscale tongue drum Beat Root.

The body of the instrument is entirely hollow, made of a metal alloy whose composition is a manufacturing secret.  The Beat Root looks like a small pot of 12 inches in diameter and 6,7 inches in thickness which weighs 11 pounds. It is pleasant and easy to handle.

Tongue-shaped slats - which have given it the generic name of Tongue Drum - are drawn on top of a metal wafer. When they are struck, they vibrate and each emit a sound within a major, minor or other scale, but we will see this point later.

Despite the fact that the sounds produced by this instrument are timeless, its conception is rather recent. Beat Root has taken the principle of the Handpan and improved it significantly to create a very interesting musical object.

Indeed, the major limitation encountered by Handpan players is the fact that one is quickly blocked by the number of notes available. Imagine a piano on which you could only play a selection of 8 notes over 2 octaves, it's rather frustrating and it limits considerably the possibilities of creation.

Before the arrival of Beat Root on the market, you had to order your Handpan by selecting the scale (major, minor, pentatonic...) of your choice. We come back to our 8 notes piano, a musician who does not want to be satisfied to play always in the same key should have several...

This is where Beat Root has made its contribution by making it possible to change the notes of the instrument: there will still be only eight notes available, but the difference is that you will be able to choose them; you will no longer be limited by a scale and a key, and you will have a wider range of use.

To do this, you just have to place small magnets under the slats. A magnet placed under a slat at a location indicated with colored dots will lower the note by half a tone. To go down a tone, you have to put two magnets.

Beat Root facilitates the handling by providing a plan drawn inside the instrument with a color code for the positioning of the magnets. The instrument is delivered with three magnets and four pentatonic scales in addition to the major and minor scales. But it is not forbidden, and even recommended, to experiment with the twenty or so possibilities offered, as the change of scale is done in a few seconds.

A tongue drum with multiple fields of application

The major interest of a multi-scale Tongue drum like the Beat Root is that it considerably widens the fields of use of the instrument. In addition to the fact that it can be integrated more easily when played with other musicians, in solo it can create different atmospheres depending on the mode chosen. It will also find applications in musicology, sound therapy or music therapy; specialists in these different fields associate each scale with a specific emotion..

Without a magnet, the multi-scale Beat Root is tuned in a major scale of C (but without the note F) with the notes G, C, D, E, A, B and D. These notes correspond to the Ionian mode; music created in this mode inspires feelings of clarity and determination.

With two magnets in place you can obtain a natural G minor scale (but without the note F) with the notes G C D Eb, G, A, Bb, D. This scale corresponds to the Aeolian mode for more relaxing atmospheres and more interiorized sequences.

The various other scales obtained by playing on the positioning of the magnets (mainly pentatonics) bring a lot of musical possibilities. The five-note scales have a somewhat magical side, less conflicting than the six or seven-note scales. A lot of traditional music, whether in Europe, Africa or Asia, is based on pentatonic scales.

A tongue drum with a built-in microphone

Another special feature of the Beat Root is that it is equipped with a piezo microphone which allows it to be connected to an amplification system such as an amp, a PA system or a recording system without having to use an external microphone. The jack connector is directly integrated into the instrument.  This will be useful during a live performance on stage, either solo or with other musicians, but also during a recording session.

We can push the experimentation even further by passing the sound picked up by the microphone through effect systems like those used by guitarists such as echo, tremolo, reverb, chorus, flanger or by exploiting the possibilities of a looper: a rhythmic loop will thus be created and the musician will be able to enrich it by adding notes, the hypnotic effect specific to the Beat Root will be further reinforced

It is also interesting to use a volume pedal, as the device is not equipped with a potentiometer to adjust the sound.

The basic position for playing a Beat Root is seated, with the instrument resting on the knees, but it is also possible to use a snare stand to rest the instrument and thus have more freedom of movement or to play standing up. It is not planned to equip it with a harness to use it like a drummer in a marching band.

It is played directly with the fingers or the palm of the hands, but mallets can also be used; it is not recommended to use drumsticks which would give a less pleasant sound by accentuating the impact and which in the long run would risk damaging the surface of the instrument. In the same idea it is not recommended to use rings or thimbles like those used on a washboard. Playing with the fingers is more instinctive; with mallets the attack will be more frank but it adds a dose of technicality in the musical gesture..

Depending on the intensity of the strike, the note will resonate for a longer or shorter time, so mastering the force used to vibrate the slats is one of the main techniques that must be mastered. When you place the palm of your hand in the center, the resonance will stop. Another technique is to place several fingers next to the note played by the other hand to muffle it and thus increase the expressiveness of the playing.

It is of course possible to play several slats at the same time with each of the hands, for example the thumb will play the note placed in front of you, the index finger on its right neighbor and the middle finger on the next. The other hand can also do the same thing with three other notes.

Anyone can play a Beat Root. The music created with this instrument is not only reserved for musicians who practice intensively. There is also a very sensual aspect to making sounds yourself by touching or tapping a surface that will vibrate directly without having to go through a string or key.

Through this sound object it is possible to find a natural creativity, inspired by the deep rhythms of life and the nature of harmony. Some will also find a mystical dimension like the one obtained with Tibetan singing bowls.

These bewitching and almost hypnotic rhythmic melodies obtained while playing have seduced many musicians or DJs who have already integrated the Beat Root in their creations. Trip Hop, electro or psychedelic projects have made room for the harmonic percussion lines created by a Beat Root.